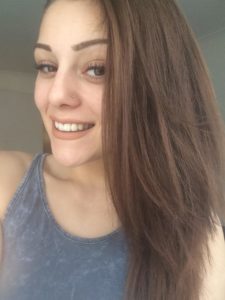 Growing up my parents were very strict. I had a lot of personal issues at home which led me to grow up being aggressive and violent, but also alone.

I was taken into care at the age of 13 years.

At the age of 15, I committed a serious offence and I was sentenced to custody.

I was locked up for 15 months. After I got out, I was sent back to prison just 4 months later for breaching my licence. I served another 8 months – partly with other young people and then in a women’s prison.

During this awful ordeal my best friend had a horrific death involving the police and sadly she passed away at the age of 18 whilst I was in prison.

I grieved my best friend so greatly and wanted a better life for both myself and for her.

I decided to walk away from the people that were around when I got into trouble and concentrated on building a better life for myself.

I now have my beautiful home which I am so appreciative of, and I work as a property manager.

It was tough growing up. I will never be able to get the time I lost back. But there is always room for a better life for yourself!

Your life, your feelings

When things are difficult

Have you read our real-life stories? About adults who got through tough times as children. Read on to see our real life stories…